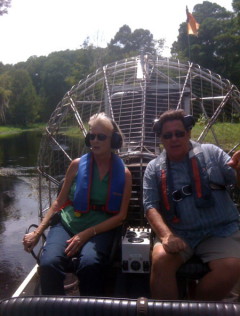 Petie earned a Bachelor's degree in Zoology from the University of Central Florida, which was no help at all when she decided to write romance novels as a second career.

Her first career as an aquatic biologist did afford her the luxury of many unique assignments, which included performing aquatic plant surveys in Florida lakes and streams by airboat. Many of those off-the-wall assignments provided background for her stories.

Petie spent most of that first career as a biologist for the Walt Disney World Resort, "The Most Magical Place on Earth." What could be more magical than driving by Cinderella's Castle on your way to work every day? Living in the heart of the theme park entertainment industry constantly tweaked her imagination and made her want to write. She had the fun of working in the land of fairy tales by day and creating her own romantic fairy tales by night. She eventually said good-bye to her wonderful "day" job to write her stories full-time.

These days, Petie shares her home on the beautiful Cumberland Plateau with her horticulturist husband and an opinionated Nanday conure named Sassy Smart-Assy who makes a cameo appearance in No Angels for Christmas, Book 2 in the Mystery Angel Romances series. She loves golf, running, and reads voraciously. That's Petie, not the conure.